Discovering the World . . . via Its Most Dangerous Buses, Boats, Trains, and Planes 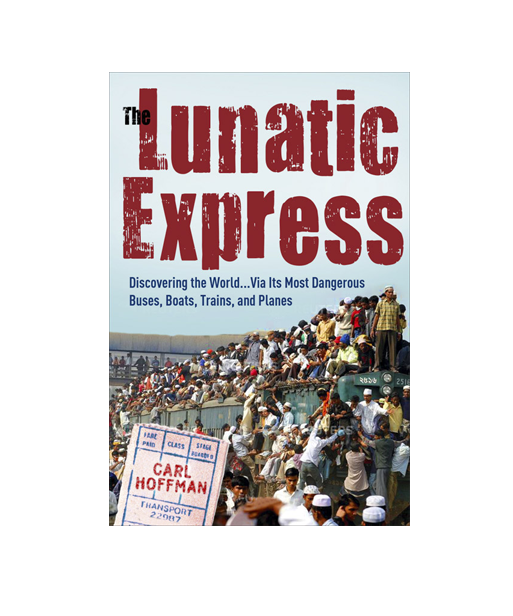 Indonesian Ferry Sinks. Peruvian Bus Plunges Off Cliff. African Train Attacked by Mobs. Whenever he picked up the newspaper, Carl Hoffman noticed those news bulletins, which seemed as far from tourism as it was possible to get.

So off he went, spending six months circumnavigating the globe on the world’s worst conveyances: the statistically most dangerous airlines, the most crowded and dangerous ferries, the slowest buses, and the most rickety trains.

The Lunatic Express takes us into the heart of the world, to some of its most teeming cities and remotest places: from Havana to Bogotá on the perilous Cubana Airways. Lima to the Amazon on crowded night buses where the road is a washed-out track. Across Indonesia and Bangladesh by overcrowded ferries that kill 1,000 passengers a year. On commuter trains in Mumbai so crowded that dozens perish daily, across Afghanistan as the Taliban closes in, and, scariest of all, Los Angeles to Washington, D.C., by Greyhound.

The Lunatic Express is the story of traveling with seatmates and deckmates who have left home without American Express cards on conveyances that don’t take Visa, and seldom take you anywhere you’d want to go. But it’s also the story of traveling as it used to be — a sometimes harrowing trial, of finding adventure in a modern, rapidly urbanizing world and the generosity of poor strangers, from ear cleaners to urban bus drivers to itinerant roughnecks, who make up most of the world’s population.

More than just an adventure story, The Lunatic Express is a funny, harrowing and insightful look at the world as it is, a planet full of hundreds of millions of people, mostly poor, on the move and seeking their fortunes.